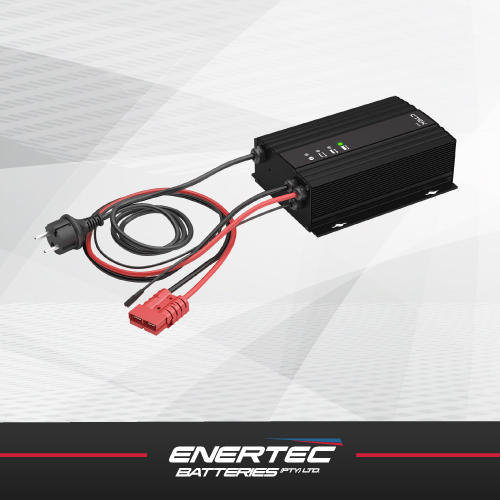 Every equipment has its own set of tools that can be used to maintain and ensure its proper operation. The battery is no different in that regard. Arguably the most significant tool for batteries is the charger. It is important to understand the key characteristics and features of the charger so that it works well with the respective battery. Enertec understands the importance of this choice and that is why we would try to educate our dealers about the different chargers available. Today, we would look at the industrial charger, I2420, from CTEK. The intention is to provide an in-depth overview of the charger by covering most of its features and specifications.

The I2420 Industrial Battery Charger

As we mentioned earlier, the I2420 is an industrial charger. This means that it is designed to support larger batteries which are used in places such as factories, construction sites, mining areas. The I2420 is an incredibly versatile charger. It is capable of charging different types of batteries which include the conventional lead acid, gel and AGM batteries. It even possesses dedicated lithium algorithms designed for lithium ion batteries. All these battery types can be recharged from a voltage level of as low as 0.5V. The prowess of the charger is also prevalent in its charging process. It maintains a record of the last 200 charging cycles which can be reviewed later. Moreover, its high frequency switching coupled with its intelligent cable loss compensation results in an efficiency of around 94% which implies faster charging and lower power usage.

A key quality of any industrial charger is ruggedness and ability to operate in harsh conditions. The I2420 is constructed using black anodized aluminum and has vibration absorbers fitted in its sealed body. This increases the chargers durability and has helped in making the charger water and dust resistant (IP64 rating). CTEK has extensively tested their chargers in difficult conditions. That is why a 2-year warranty is offered for I2420. In terms of temperature, the charger can deliver optimum charging current at even 40 °C. This is made possible by the “Resonant Converter” technology which helps in charging the battery in the shortest possible time with an efficiency of around 94%.

The I2420 offers great ease of use as well. One can keep the charger connected to the battery permanently without worrying about any damage caused by overcharging. This is due to its various safety features. The drive-off protection ensures that the battery would not work if the charger is still connected to the battery in the reverse polarity. The over-voltage protection and temperature sensors prevent the battery from overcharging and overheating. The user is further guided by the clear LED indicators that shows the state of charge which can be used to assess whether a recharge is needed or not. Additionally, one can use the 2.5m LED wire as well to view the details if the charger is difficult to access.

Finally, let us conclude our discussion by looking at some specifications of I2420. It needs a power source of 220-240 VAC at 50-60Hz with maximum current of 3A. On the other end, it can charge the battery up to 28.8V through a maximum charging current of 20A. The battery charged using I2420 has a back current drain of less than 1Ah per month. The charger also protects the battery and itself from any damage by limiting the ripples to less than 4%. Its ambient temperature range for operation is -20 °C to 50 °C which changes to -40 °C to 70 °C for storage. It is designed to charge 24V lead acid batteries and can be customised accordingly for AGM, gel and lithium ion batteries. The range of battery capacity supported by I2420 is 40-600 Ah. In terms of its physical dimensions, the charger’s net weight is 1.4 kg with dimensions of 193x148x74mm.