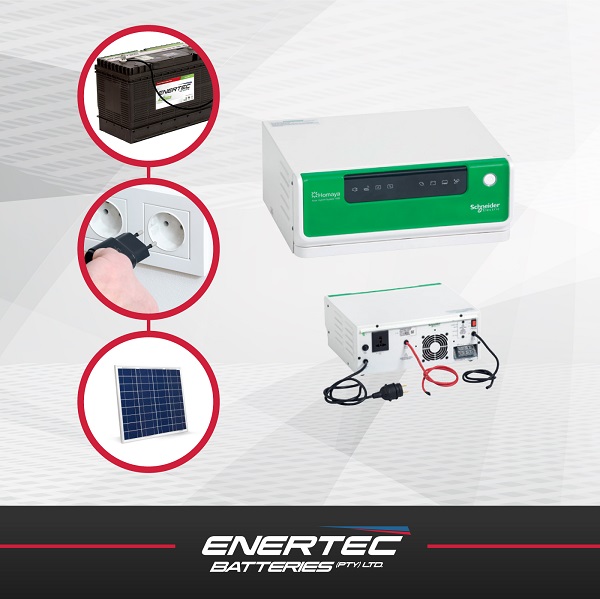 Globally, the use of solar energy is on the rise as more people realize the benefits of this green energy source. Not only does it help in reducing carbon emissions and protecting the environment, but it also reduces energy costs as well. There are two main purposes for shifting towards solar energy. First is to seek an off-grid power solution while the second is to get a backup power solution. The latter is the more popular of the two. Enertec has noticed this trend and that is why, today, we would discuss the Homaya Solar Hybrid Home System (SHyS) along with these relevant details.

The first question that one may generally have is what is the Homaya Solar Hybrid Home System (SHyS)? Well, it is a product of the renowned Schneider Electric company.  The system is designed to provide a back-up power solution. This means that its purpose is to be used in conjunction with the mains power supply instead of replacing it all together. The system aims to lower electricity consumption from the grid and subsequently reduce the associated costs. It achieves this goal by providing reliable electricity from both the grid and solar energy. At its core, it functions as a simple inverter which converts the DC voltage from the battery to AC voltage needed to power electronics. There are 2 variants of this system: Homaya Solar Hybrid System 850 and Homaya Solar Hybrid System 1500.

Naturally, after understanding what Homaya Solar Hybrid System is, one may want to learn how to develop a system and what components would be needed along with SHyS. Essentially, there are two other components which includes the battery and the solar panels. Getting the sizing right of all 3 components is the first step of the system development process. Let us look at the method of determining the size of each component.

The maximum limit for loads is 850 VA and 1500 VA respectively for the 2 variants. This effective load can be achieved through a wide variety of appliances. Regarding the batteries, it is more dependent on load size and desired backup time but there are some recommended ratings for them as well. The recommended battery size is 12V 100Ah-200Ah (850 model) and 24V 100Ah-200Ah (1500 model).

Both variants of SHyS come with safety protections in place. They include built-in protection against short circuit, overload, excessive heat, and internal fault. Furthermore, there is a resettable AC fuse and a built-in DC fuse.  The AC fuse has a rating of 10A (850 model) and 15A (1500 model). This fuse has a lifespan of over 500 cycles. The DC fuse protects the system from damage due to reverse battery polarity and cases where the MOSFET in the system gets short-circuited. The DC fuses used in the system are 30 A automotive fuses which can be found easily in the market.

Coming to some general features of SHyS, it possesses a power factor around 0.8. This means the maximum load that can be connected to each model is 680W and 1200W, respectively. The unit has an IP 21 rating which means that it is suitable for rugged use indoors. The charging capability of SHyS is not limited to conventional lead acid batteries as it can charge gel, tubular and VRLA batteries too. It is however not recommended to charge a lithium ion battery using this system as the built-in algorithm is not written to cater for these types of batteries. A change in the future can be made if the demand increases.