What Are The Two Types 0f UPS? 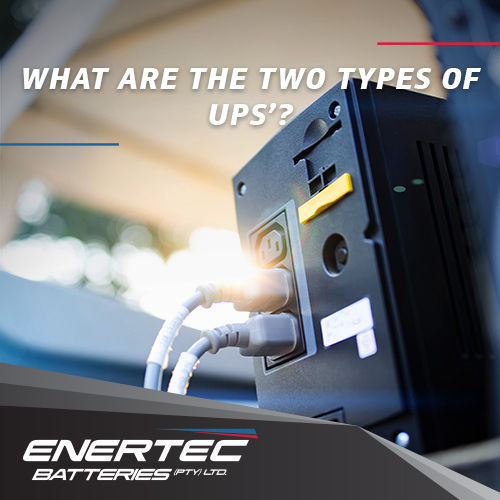 While the popular types of U.P.S comprise of standby U.P.S and online U.P.S, there is an another fairly common type of U.P.S which is known as a Line-Interactive UPS.  It is important to understand the key differences of all three classifications in order to understand the market dynamics of U.P.S. systems. Each of them has their own defining traits which sets them apart from one another. We will inspect each of them one by one.

The first focus would be the Online Double-Conversion U.P.S. This is used commonly in industries and sectors which handle critical and sensitive electronic loads. It is called an online U.P.S because there is a constant flow of current and it does not possess any switch, which eliminates the possibility of any fluctuation during the transition from mains to backup power.

The double conversion minimises the risk of current fluctuation further. The A.C power at the point of generation is pure but, during transmission and distribution, noise becomes a part of its signal which can cause Voltage/current spikes, brownouts and drops. By converting this signal to D.C and then back to A.C, our electronic components can be isolated from these variations in the transmitted A.C signal.

The Line-Interactive U.P.S is more focused towards handling power fluctuations than providing backup. Its key advantage is the fact that it can accept a wide range of input Voltage and then adjust it to the suitable level through its Voltage-boost/stabilise circuitry. The Line-Interactive U.P.S can be seen as the intermediate option between online and offline U.P.S’s in terms of cost and Voltage spike/fluctuation protection.

The offline U.P.S is the most cost effective of the three options. It makes use of an electronic relay switch to shift from main power to backup in the event of an outage. This comes with the tradeoff of greater A.C fluctuations which can potentially damage sensitive electronics. That being said, the offline U.P.S works perfectly well with everyday household electronics.