What Is The Difference Between A Standby UPS & Online UPS? 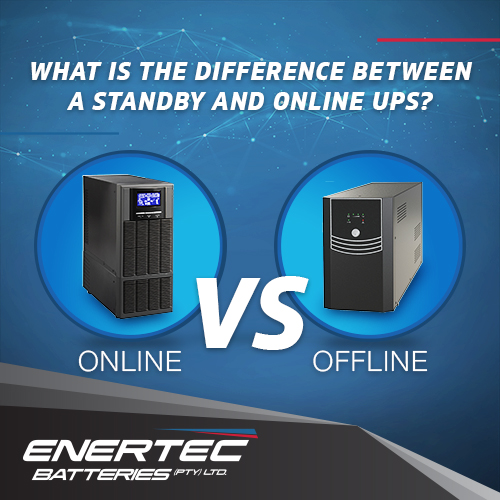 There are different types of U.P.S’s available on the market. The purchase decision is often motivated by factors such as nature of usage, types of load, runtime required and other technical specifications. One key point to consider is to look at the type of the U.P.S. While there are different types of U.P.S’s in the market, two common ones are the standby or offline U.P.S and the double-conversion or online U.P.S.

Both of have certain distinguishing features that sets them apart from one another. Learning about them gives an advantage to the buyer as a U.P.S that matches their requirements can be purchased.

The first type of U.P.S that we would examine is the standby U.P.S.

Also known as offline UPS, this highlights the fact that this U.P.S does not supply current at all times or it remains in standby mode during normal operation. The benefit of the U.P.S being on  bypass/standby when not running is that it requires smaller heat sinks and fans to keep the system cool. In times of a power breakdown, there is a switching time between the mains A.C supply failing and the backup taking over.

This time period is around 5 milliseconds, which is quick enough for a computer not to restart, but can damage more sensitive equipment such as a Vital Signs monitor. The standby U.P.S is cheaper and more commonly used in households since most appliances are capable of functioning without any damage at that switching speed.

The second type is the online U.P.S. The key difference from the offline U.P.S is that there is a continuous supply of stable 220 or 380 Volt current with no switchover. This makes it ideal for more sensitive equipment which can get damaged with even a minor mains fluctuation. Due to the constant flow of current, the components of online U.P.S’s generate more heat which means they requires larger heatsinks and cooling fans.